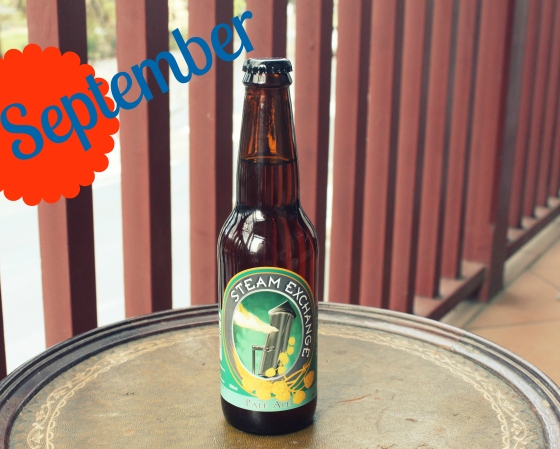 Hey guys, did you know it’s September? (I mean obviously you do, I don’t think you live under a rock. Unless you do and you are rocking WiFi; in which case sorry) September for me holds the promise of the uni semester break and the continual growing warmth of spring. However for Nick it holds much more than that. This is the first in a series of ‘Beer of the Month’ on which Nick and I will showcase a South Australian beer. I’ll be snapping the photos and having a taste, and Nick will be pouring his love out (pun intended) through the keyboard, to let you know exactly why supporting local brewers is so important. And most importantly why that beer is beer of the month!

Like no other food or drink, beer is a medium for binding me with the memories of events, people and seasons. Every month has an ideal variety; one that every time it touches your lips will draw your mind to a particular place or a time. It’s a joy that South Australia is getting rather good at making these…

So what is September? The weather is gradually changing; as spring begins to creep in, the doldrums of winter are replaced by optimistic sunlight. The temperature gauge begins to creep up during the day and the sunlight hours begin to stretch out, but the nights are still brisk and (particularly with Adelaide’s weather this year) have enough chill in the air to remind you that there’s still a long way to go until the balmy evening and backyard BBQs.

And what else characterises September in Adelaide? Football – the egg-shaped variety. Whether you’re an avid fan or remain completely disinterested, chances are that it’s going to play either a direct or secondary role over the next thirty days, culminating with one particular game on the last Saturday of the month.

Considering all of this, there’s one South Australian beer personally capturing September perfectly within a 330ml amber vessel. Steam Exchange’s Pale Ale is the embodiment of optimism with a pivotal reminder of what we’ve come from, all the while harking back to strong ties to the Goolwa and Encounter Bay community.

This is by no means a showstopper, but it has enough character to be charming and memorable for drinkers of varying levels. For those enamoured with the hoppy fad captivating Australia’s craft beer community, this Pale Ale is divergent with the malts (inc. Marris Otter – UK) here providing a gentle rounding, to my palate almost reminiscent of a traditional lager nee popular examples like Samuel Adams or Brooklyn Brewery. And for those that prefer a more gentle flavour, it exerts enough bite and hoppy sentiment (East Kent Goldings – UK, and Styrian Goldings – EU) to challenge the senses, and at 5.6% it’s strong enough to make a dull game interesting but sessionable enough to be able to knock back and remain coherent deep into a tight last quarter.

Steam Exchange Pale Ale is available at several outlets across South Australia as well as online, all at reasonable prices for a local, handcrafted brew. If you can deal with some poor formatting and confusing links, you will find all the details on the Steam Exchange website.