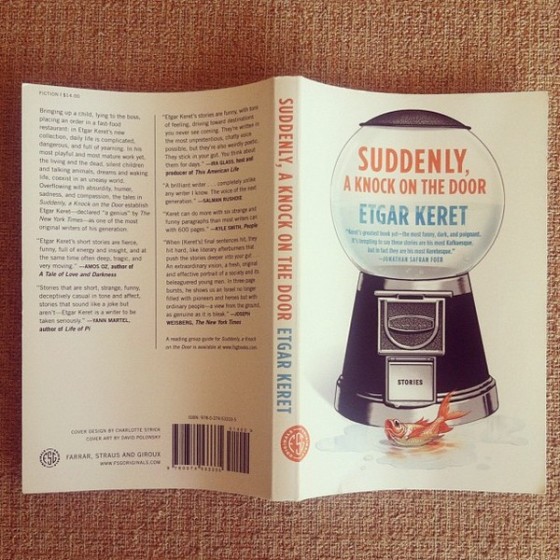 He is known as the voice of his generation, Etgar Keret is an Israeli writer who you should definitely know about. I recently read “Suddenly a Knock on the Door” and it blew. my. mind.

Short stories have always been among my favourite; Roald Dahl’s were particularly alluring, read during an eventful English class (my English teacher was sick so we had a substitute who raised llamas; you could not make this up) and quoted ever since.

It’s not that I don’t love a good epic, or a novel that gets right into the nitty-gritty. It’s mainly that the requirements of a short story are strict and tough, to get the reader where you want, and need them immediately, to be succinct, to leave them begging for more, all in a few pages.You can have nothing but respect for a short story that draws you in.

And I’ve never seen it done better than by Keret.
This book had me gripped, if it fell short it was immediately proceeded by something that obliterated that short coming from my mind. My favourite was a story called Lieland – in which a man’s lies become a reality.

Each story left you wanting to know more, left you feeling like you knew the characters and cared about their future welfare.
Seriously read this book.